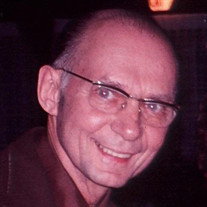 Frank Drozd 103, of Palm Harbor, passed away peacefully on August 19, 2021. Frank was born on November 7, 1917, in Holyoke, Massachusetts. In pursuit of a good job, Frank’s parents moved to Detroit, Michigan in 1923 when he was six years old. Frank survived four younger brothers. His wife Olive, of 70 years passed away in 2012. He is survived by a sister, Joanne Bowman; daughter, Linda Curry; son, Lawrence Drozd; granddaughter, Dawn Ignagni; grandson, Jonathan Curry; and four great granddaughters, Isabella Ignagni, Sofia Ignagni, Elise Curry and Sidney Curry. At age 19 Frank started working at the Dodge Truck Assembly Plant where he provided a secure and happy life for his family and retired 36 years later. Frank was drafted into the army shortly after the start of WWII. His platoon, along with General Patton’s 7th army was sent to Sicily and engaged on Operation Husky, a massive 38-day battle. Frank was seriously injured, but after a 100-day hospitalization he returned to the war on special duty guarding VIPs, supplies and prisoners. He was also employed as an interpreter, using his knowledge of the Polish language. Frank and Olive moved from Michigan to Highland Lakes in Palm Harbor in 1977. Their retirement life was joyful, filled with many new friends and almost every fun retirement activity you could name! He took on many leadership roles in the organizations they joined as well as becoming president of their condominium association. Frank was a loving son, brother, husband, father, grandfather, great-grandfather, and friend to many. He will always be remembered and missed by those who knew him.

The family of Frank Drozd created this Life Tributes page to make it easy to share your memories.

Frank Drozd 103, of Palm Harbor, passed away peacefully on August...

Send flowers to the Drozd family.