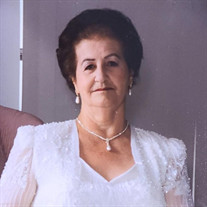 Fiorina Colucci, 91 of Palm Harbor, Florida passed away on Saturday, November 6, 2021. Fiorina was born on Tuesday, July 8, 1930 in the countryside of Casalvieri, Italy to Rosa and Nicola Giancarlo. She was the second born of five beautiful daughters and lived through World War II. Fiorina married Orlando Colucci on April 17, 1947. Shortly thereafter, they moved to Detroit, Michigan and then to Pueblo, Colorado where they owned and operated a bar. Fiorina soon welcomed her first born, Sam, followed by a daughter, Iole. She returned to Italy in 1949 with her young family, where she and Orlando worked hard running their country store. She was later blessed with two more children, Albertina and Fabio. Always in search of a better life, Fiorina and Orlando returned to the United States in 1962. Settling first in California and later in Michigan, Fiorina devoted her life to caring for her children, grandchildren, and great grandchildren. She and Orlando retired to Florida in 1984, where her children and their families soon followed to be together. She spent her retirement staying active by cooking, baking, gardening, and playing bingo. She could often be found carrying on the Italian traditions of making sauce, pasta, and bread from scratch. Fiorina was a woman of faith, selfless love, and generosity. She was loved by everyone who came to know her, and is most remembered for her unwavering devotion to her family. She was preceded in death by her son, Fabio (Laura), beloved husband of 66 years, Orlando; children Sam (Lynn) Colucci, Iole (Joe) Amato, and Albertina Iannella; 9 grandchildren, Carlo (Candice), Marla (Feddy), Rina (Jeremy), Erica (JP), Marco, Lisa (Cesar), Sandra, Brianna, and Angela; and 8 great grandchildren, Alexis, Angelo, Isabella, Gianna, Mia, Joey, Valentina, and Vivianna. Our hearts will ache until we meet her again in Heaven. In lieu of flowers, please make donations to the Alzheimer's Foundation.

Fiorina Colucci, 91 of Palm Harbor, Florida passed away on Saturday, November 6, 2021. Fiorina was born on Tuesday, July 8, 1930 in the countryside of Casalvieri, Italy to Rosa and Nicola Giancarlo. She was the second born of five beautiful... View Obituary & Service Information

The family of Fiorina I. Colucci created this Life Tributes page to make it easy to share your memories.

Fiorina Colucci, 91 of Palm Harbor, Florida passed away on Saturday,...

Send flowers to the Colucci family.