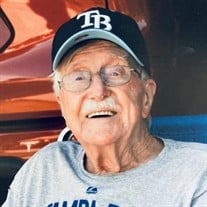 Edwin Bryan Pryor, 92, of Palm Harbor, Florida, died December 13, 2020. Mr. Pryor passed away after his loving wife, Phyllis, of seventy years recently went to be with the Lord. Edwin is survived by his four children, Dan Pryor (Laura), Mary Stinger (Darrell), Becky Buckles (Rod) and Karen Jeter (Ray). Ed is also survived by his sister Linda Kerr (Bob) while his brother Chet Pryor (Jeanette) passed away earlier this year. Additionally, he leaves behind ten grandchildren, eight great grandsons, nieces, nephews and many other friends and family. Ed was born and grew up in Akron, Ohio where he began by plowing farmer’s fields with his homemade tractor. He then went on to develop Pryor Excavating Company into a successful business excavating, grading roads, basements and preparing commercial building sites during the 1950s and early 1960s. There are many homes, businesses and roads in the Akron area with his quality foundations. Then in 1964 Ed sold his excavating business, moved his wife and four children to Tampa, Florida for a fresh start in the sunshine. He then built a new business, Pryor Construction, after earning his State of Florida Class A General Contractor License. He then built and sold custom homes in the Tampa area over the next few decades. Each home was carefully constructed to his high standards, and he especially enjoyed personally doing the final trim work in a very precise manner. One of the custom homes Ed built was on a beautiful lake, and his wife Phyllis liked it so much that he decided not to sell it. So they moved in and lived there for years with an awesome view of the sunsets over the lake. Ed and his family enjoyed their lifestyle on the lake boating, sailing, skiing, fishing and fun! In his retirement Ed kept very busy with smaller construction projects where he built various games and yard decorations for his family including all the grandchildren. He was always working on something, never sitting still for very long, always helping others including family, friends and neighbors. Ed, Dad and Grandpa will be greatly missed by all of us… he was such an important part of our lives over many years.

The family of Edwin B. Pryor created this Life Tributes page to make it easy to share your memories.

Send flowers to the Pryor family.