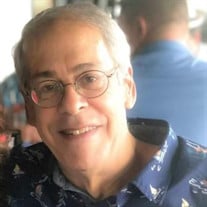 Douglas L. Timm Doug Timm of Palm Harbor, Florida, died on September 5, 2021. Doug was known for his light-heart, easy laugh, quick wit and tall tales that brought a smile and hearty laugh to those around him. He selflessly took care of his family in numerous ways. He joined his wife tending to her beautiful garden, joyfully baked his famous chocolate cake for every birthday, and made the best grilled cheese sandwiches upon request, any time day or night. Doug could also produce miscellaneous knowledge about a myriad of subjects, as though he carried an encyclopedia around in his pocket. A long-time resident of Florida and active soul, he passed his love of all things swimming and music to his girls. He loved the beach, creating beautiful stained glass windows, the Beach Boys, his rescue dogs and most of all, cherished the time he spent with his family. He always said his greatest achievement was raising his two daughters. He couldn’t have been more proud of their accomplishments, which he happily recited to all he met. Doug was born in Tulsa, Oklahoma on March 24, 1949, and raised in Long Beach, Indiana. He earned a Bachelor's degree from Indiana State University and a Master's from the University of Indiana, where he studied education. It was at ISU that Doug met the love of his life, Mary Frances. They moved back to Northwest Indiana to start their family, where Doug worked as a teacher and swim coach. In 1983 they joined other family in Florida, where Doug worked for Glaxo and then the Pinellas County Sheriff's Office, and helped coach his daughter's high school swim team at Dunedin. He is survived by his wife of 48 years, Mary (Ryan); daughters Kelly Timm (Kyle Rasmussen) and Katy Eisenstein (Dave); Aunt Maxine Powell, and numerous cousins, brothers- and sisters-in-law, nieces, and nephews. He was preceded in death by his parents, Kenneth and Margaret (Powell) Timm; sister, Marcia Timm; and parents-in-law, William and Rosemary Ryan. To celebrate his life, in Doug fashion, tell a joke, good or bad, silly walk down the grocery aisle, and give your family an extra hug. If you would like to make a donation in his memory, please consider a gift to the Pinellas County Humane Society or the Morton Plant Mease Healthcare Foundation. A celebration of Doug’s life will be held when family and friends can safely attend.

Douglas L. Timm Doug Timm of Palm Harbor, Florida, died on September 5, 2021. Doug was known for his light-heart, easy laugh, quick wit and tall tales that brought a smile and hearty laugh to those around him. He selflessly took care of his... View Obituary & Service Information

The family of Douglas L. Timm created this Life Tributes page to make it easy to share your memories.

Send flowers to the Timm family.