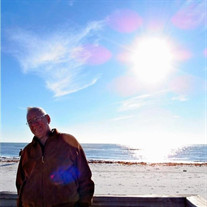 Donald Albert Koeller, 86, of Dunedin, FL, passed peacefully on September 2, 2018 after a brief illness. Born January 14, 1932 in Chicago, IL to Walter and Matilda (Siegwart) Koeller, he attended Lutheran schools. Don was a lifelong educator: all who knew him were his students. He believed that the challenge of learning should be fun, and that the greatest lessons involved critical thinking and self-reliance. After first teaching in Lutheran schools in Long Island in 1954, he transitioned to public schools in Newton, MA in 1965, where he enjoyed a rewarding career teaching elementary and high school history until his retirement in 1994. Don also proudly developed a national social science and anthropology curriculum at Harvard University. Forever also a student of life and inventor, Don was devoted to his many pastimes and hobbies. He reveled in twirling his partners across any dance floor, perfecting and teaching others his bridge strategy, creating miniature worlds with his model train art, crafting stained glass ornaments, sailing, and tinkering with anything he could get his hands on. He enjoyed exploring philosophical questions and often challenged others to present him with intriguing mental puzzles. Don invented scores of word, card, and board games, including a spinning top game, and was constantly chasing the next great idea that would catapult him to fame. A favorite activity was gathering his grandchildren to play in an annual tournament of his award-winning pirate treasure hunt game, Pirate’s Choice. After many wonderful years in Acton, MA with his wife and three children, Don moved to his beloved lake cottage in Lunenberg, MA. His relentless curiosity and drive to explore led him to travel the world as a ballroom dance host aboard cruise ships. Don visited seven continents, countless countries, and regaled his family and friends with stories of his wild adventures at sea. For a time, his home was the open road: he loved the freedom afforded by his mobile home, which eventually led him to settle in Largo, FL. Always in search of a view to appreciate while reading the morning paper and drinking his black coffee, Don’s final home overlooked the sparkling water of Dunedin Channel and Honeymoon Island--windows decorated with his own stained glass creations. Don remarked that to find peace he would “sit by the window or on the patio and watch the birds and the sunsets and focus on the good things ahead.” Don loved deeply and was loved by many. His impressive stature and enormous personality filled any room. He continually sought out new experiences, and his passion for self-improvement and self-inquisition endured until his final days. He will be remembered for his sharp wit, his playful nature, his affinity for unnecessary “quotation marks,” his resourceful ingenuity, and his endless search for the horizon. He will be greatly missed by his daughter Kathryn Bosworth, with her husband Charles Bosworth, and their children Rebecca Bosworth and Gregory Bosworth; by his son Jonathan Koeller, with his wife Susan Koeller, and their children Megan Koeller and Elizabeth Koeller; and by his daughter-in-law Jennifer Koeller Brooks, and her children Hannah Koeller and Hilary Koeller Smith with her husband Zachary Smith. He will also be remembered by many nieces and nephews. He is predeceased by his son, Steven Koeller, and his brothers, Walter Koeller and Ralph Koeller. Donations in his memory may be made to Massachusetts General Hospital, Development Office,125 Nashua Street, Suite 540, Boston, MA 02114. A private family memorial will be held at a future date.

The family of Donald Albert Koeller created this Life Tributes page to make it easy to share your memories.

Send flowers to the Koeller family.