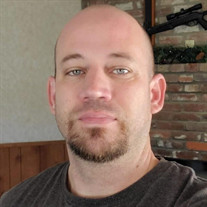 David Matthew Kessinger, born November 10, 1978, to Donald and Esther Kessinger, was a loving son, brother, and friend. He went home to be with the Lord on November 25, 2021, at the age of 43 while enjoying what he loved, but not before touching the hearts of everyone he met. David was a family-oriented man who cared deeply for others and was fiercely protective of the vulnerable and those he loved. While outwardly stoic, he had a soft side for dogs, children, and the people he held close. He truly had a heart of gold and earned the admiration and respect of almost everyone who knew him. David liked excitement and being with him meant “being bored” was not an option. He enjoyed playing (and often winning at) darts, eating great food, staying fit, racing and working on fast cars, driving his motorcycle on the open road, and spending time with his family, friends, and his beloved dog. Growing up, David followed closely in his oldest brother’s career footsteps and many shared interests, from learning all he could about security and alarm systems to restoring (and re-restoring) the 1980 Pontiac Firebird that they passed back and forth for more than two decades. He was goal-oriented and was awarded numerous licenses and certifications for alarm and fire suppression system installation and security management. He lived out his dream to move to California where he formed several companies with his nephew, Josh, and secretly hoped to one day become an actor. It was in California that David finally met his soul-mate and fellow motorcycle enthusiast, Margaret, and found the joy of belonging with the Throttle Nutz riding club, which became his extended family. David is survived by his loving parents, Donald and Esther; his brothers Keith, Richard, Don, and Dan; his sisters Chel, Charli, and Jess; dozens of aunts, uncles, cousins, nieces, and nephews; and his faithful dog, Bain. He was taken far too soon, but he will be forever loved and remembered by his family and friends.

David Matthew Kessinger, born November 10, 1978, to Donald and Esther Kessinger, was a loving son, brother, and friend. He went home to be with the Lord on November 25, 2021, at the age of 43 while enjoying what he loved, but not before touching... View Obituary & Service Information

The family of David Matthew Kessinger created this Life Tributes page to make it easy to share your memories.

Send flowers to the Kessinger family.