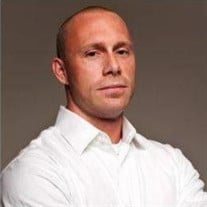 David Preston Gilbert, 37, resident of Clearwater, Florida, passed away unexpectedly on Wednesday, August 18, 2021. David was born September 11, 1983, to John Preston Gilbert and Pamela Wyatt in Painesville, Ohio. David graduated from Countryside High School in Clearwater, Florida from the class of 2002. He then attended the University of South Florida from 2002 – 2006 earning a Bachelor of Arts degree in Mass Communications. David continued his education at Stetson College of Law where he earned his Doctor of Law (Juris Doctor) in 2010. Upon graduation David founded The Gilbert Law Firm in St. Petersburg, Florida. David was affectionately known by his family and many friends as Davey or Dave. He was a wonderful person with a smile that touched the hearts of anyone who knew him. He was a loving son, brother, husband, nephew, cousin, and friend. He enjoyed living life and he had many interests. David was a talented artist and versatile musician. He could play the drums, guitar, trumpet, and bass; and he had a band in his youth called Davey and the Dekes. Furthermore, he loved wakeboarding, fishing, boating, and travel. He is survived by Pamela Wyatt (mother), Michael Wyatt (stepfather), John Gilbert (brother), Kimberly Wyatt (sister), Christine Gilbert (stepmother), Taylor Gilbert (brother), Christy Wyatt Bruner (stepsister), and Danica Sanson (former wife). David was preceded in death by his father, John Preston Gilbert. In lieu of flowers please make donations in David's memory to the ASPCA https://secure.aspca.org/donate/ps-honor-sl-p1?ms=MP_PMK_GooglebrandHonorSL-T4&initialms=MP_PMK_GooglebrandHonorSL-T4&pcode=WEBHONORSLPPC&ds_rl=1066461&gclid=CjwKCAjw95yJBhAgEiwAmRrutHx4saiwkDKsdTs4L52_4RMiYfGhusPBrkzzLVvhJE2jz_YKc7tlrRoC8G8QAvD_BwE&gclsrc=aw.ds

The family of David Gilbert created this Life Tributes page to make it easy to share your memories.

Send flowers to the Gilbert family.