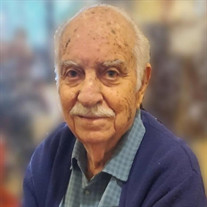 Bill Athanasiou, 93, born November 14, 1928, in Evia, Greece, passed away peacefully on February 20, 2022. An emigree to the United States in 1956, he worked beside his beloved wife, Joann, whom he'd met in Greece four years earlier. They were inseparable for life, married 62 years, until she passed away last year. Bill was a Merchant Marine and a mechanical engineer in Greece before he emigrated to the US. He and Joann opened a fur finishing business in Manhattan but longed for the warmth and family atmosphere of Florida after they had their children, George and Olga. In Florida, Bill and Joann owned the Ann Esther Inn Motel on Clearwater Beach for over 30 years. His meticulous record keeping was only overshadowed by his love of working with his hands; plumbing, painting, carpentry, upholstery, car mechanics, electric work, you name it! His outings to the hardware store with his daughter are legendary. From a young age, Olga followed him everywhere around the motel and learned so much by watching him work as he patiently explained what he was doing. If he repaired something, it was repaired for life! After retirement, Bill worked tirelessly on his home and garden well into his late 80’s and he always enjoyed spending time with his three grandchildren, Billy (Athanasiou), Yana (Athanasiou) and Alex(Carr). Above all else, Bill was a loyal husband, a kind and loving father, a precious and sweet grandparent, and one of the most caring and patient souls to ever live. His memory will never be forgotten by all who knew and loved him. Bill is predeceased by his wife Joann and his son, George. He is survived by his daughter Olga Carr(husband, Lee), his precious grandchildren Billy, Yana and Alex, and his beloved family in Greece. In lieu of flowers, please do something nice for someone and/or donate to the Holy Trinity Greek Orthodox Church of Clearwater.

Bill Athanasiou, 93, born November 14, 1928, in Evia, Greece, passed away peacefully on February 20, 2022. An emigree to the United States in 1956, he worked beside his beloved wife, Joann, whom he'd met in Greece four years earlier. They were... View Obituary & Service Information

The family of Bill Athanasiou created this Life Tributes page to make it easy to share your memories.

Send flowers to the Athanasiou family.