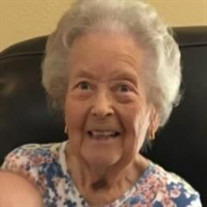 Anna Bell Bauer age 100, of Dunedin, FL passed away peacefully Sunday, December 26, 2021. She was born in Jennings, FL on August 1, 1921 to Jim and Mamie Bennett. She was married for 72 years to her beloved husband Laurel Bauer, who preceded her in death in 2016. She was the fourth of seven children and was the sole survivor when she passed. She was also preceded in death by her son-in-law, Bill Varney. She is survived by her children, Shirley Varney and Brenda (Ron) Benn; grandchildren, Gregory (Lia) and Bradley (Taki) Benn and Audrey (Chris) Beltz; She is also survived by her great-grandchildren, Katelyn, Alex, Julia, Evelyn and Annabel Benn and Lincoln Beltz. Anna grew up in the small town of Jennings, FL where she was raised working on a small farm. Even though she often described it as a difficult life, she said the farm life taught her how to take responsibility for chores and taught her the value of a dollar. She was the first in her family to graduate from high school, where she was also the valedictorian of her class. She subsequently graduated from nursing school, and then volunteered to serve her country in the United States Army in the Second World War, where as a nurse she bravely tended to America’s soldiers. This is where she met her future husband, Pvt. Laurel Bauer. After the War, she returned to America where she married and settled with Laurel in Ann Arbor, MI. She worked as a nurse in Ann Arbor for the University of Michigan for nearly 30 years until her retirement in 1983. Anna and Laurel subsequently moved to Dunedin, FL to enjoy their retirement together. In retirement, she loved afternoon walks, visiting the numerous Florida fairs and festivals, tending to her yard, cheering on her Michigan Wolverines and Tampa Bay Lightning, watching Wheel of Fortune and Jeopardy, as well as playing Scrabble and card games with her family. She and Laurel would return to enjoy their summer lake home at Lake Chemung in Howell, MI every year through 2014. Anna was a caring, generous person who never hesitated to give to organizations in need. She always made those around her feel welcomed, and anyone that truly knew her, knew she had a big heart, especially for her family. As a testimony to the respect and love her community had for her, on her 100th birthday she was delighted to be honored with a parade by numerous veteran’s organizations, which was covered by local news organizations. She deeply loved and missed her husband Laurel, who passed in 2016, and we take comfort in knowing that her pain from missing him is now relieved, and they are reunited together. Visitation will be held at Curlew Hills Funeral Home, 1750 Curlew Road, Palm Harbor, FL, 34683, January 2nd, 2022 from 11:00 am to 1:00 pm with service at the same location on Monday, January 3rd, 2022 beginning at 11:00 am. Burial will be at Evergreen Cemetery, Jasper, FL, at a later to be announced date and time. All donations in her name should be made to JDRF, 24359 Northwestern Hwy #125, Southfield, MI 48075.

Anna Bell Bauer age 100, of Dunedin, FL passed away peacefully Sunday, December 26, 2021. She was born in Jennings, FL on August 1, 1921 to Jim and Mamie Bennett. She was married for 72 years to her beloved husband Laurel Bauer, who preceded... View Obituary & Service Information

The family of Anna B. Bauer created this Life Tributes page to make it easy to share your memories.

Send flowers to the Bauer family.