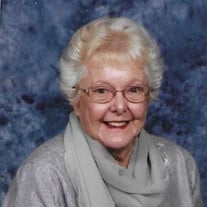 Elizabeth Ann Blanton Howard of Gilkey, N.C. passed away peacefully on Monday, June 7, 2021 in Tarpon Springs, Florida at the age of 87. She and her husband Billy, married 70 years, had lived in Tarpon Springs near their family for the past... View Obituary & Service Information

The family of Ann Blanton Howard created this Life Tributes page to make it easy to share your memories.

Send flowers to the Howard family.