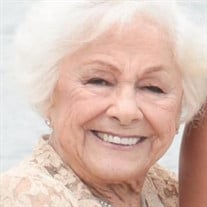 Angela (Angie) Arestia of Palm Harbor died peacefully at Suncoast Hospice on December 3 following a brief illness. Angie was born in 1926 in New York City to Victorio and Eufemia (Bilbao) Urrutia, who had emigrated from Mundaca, Spain. She grew up in the melting pot of Little Italy where her Basque family was active in the social activities of Centro Vasco Americano. They enjoyed dancing, singing, and spending time in Plattekille, New York in the summers with other Basque families. Angie grew up neighbors with Salvatore (Sam) Arestia whose parents had come to the USA from Ragusa, Sicily. Sam and Angie were married in 1948 in New York City and were always surrounded by lots of family and friends, which Angie loved and always cherished. Angie’s father and uncle were excellent chefs, from whom she learned her culinary skills and love of cooking. Angie and Sam moved to Ridgefield, New Jersey where she worked for many years for Associated Films, and they made many lifelong friends. They fully enjoyed life, traveling with friends and family on many cruises to Europe and the Caribbean. They relocated to Florida in 1982, first to Pembroke Pines and then to Highland Lakes in 2001. Moving to Highland Lakes meant reuniting with Sam’s three siblings and their spouses, which became a huge support system for them. Enduring members are Rosario (Sonny) Arestia and his wife Carm, and Carol Acierno. Angie had a strong work ethic, always looking to keep busy and loved working at anything related to beauty products or jewelry, her passions. Later in life she had volunteered at Suncoast Hospice, and the family is so pleased that she could end her days at a place she always admired. The family also appreciates the care Angie received from HomeInstead which allowed her to remain in the home she loved. Angie is survived by her daughter Janet Filipovsky (Alan). She was fondly known as Nani to her six grandsons Matthew, Jamie (Vivian), Daniel (Amanda), Jason (Kristina), Charlie (Sarah), and Kyle (Toniann), and to her five great-grandchildren Lucas, Sawyer, Reed, Harper, and Hudson. She was predeceased by her sister Natalie in 1987, her husband Sam in 2006, and son Kenneth (Jane) in 2009. Angie loved a party and never missed a grandchild’s graduation or wedding, traveling to Brazil, Connecticut, Vermont, and Rhode Island. In her later years she traveled regularly to New Jersey to spend time with Frank Leanza, an old friend from childhood, and his family. Due to Covid-19 memorial services will be private at this time.

Angela (Angie) Arestia of Palm Harbor died peacefully at Suncoast Hospice on December 3 following a brief illness. Angie was born in 1926 in New York City to Victorio and Eufemia (Bilbao) Urrutia, who had emigrated from Mundaca, Spain. She... View Obituary & Service Information

The family of Angela Arestia created this Life Tributes page to make it easy to share your memories.

Send flowers to the Arestia family.