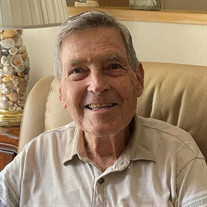 Allan Kinsman Botbyl, 89, of Palm Harbor Florida, died peacefully in his sleep Saturday, November 27th, 2021. Born February 19th, 1932 in Passaic, New Jersey, Allan was the son of the late George Botbyl and the late Marjorie Kinsman Botbyl Heise. He was an avid golfer and enjoyed leading Bible studies at church. He was quite proud of the fact that his Bible studies always had more participants than the pastors. Predeceased by both his brothers: George Botbyl (Billie) of Texas and Bill Botbyl (Lynne) of New Jersey. Survivors include three daughters: Jane Boyd (late Jack Boyd) of Tampa, Florida, Lori Scribner of Oldsmar, Florida, and Laura Roop (Chip Roop) of Wilmington, Delaware; one son: Garry Botbyl of Lajitas, Texas; six grandchildren: Courtney, Jamie, Charlotte, Danielle, Helen, and Brian; four great-grandchildren: Emily, Zaydin, Jackson, and Lucas; one sister-in-law: Gayle Schultes of Largo, Florida. He is also survived by many cousins, nieces, and nephews. He loved spending summers at Lake Wallkill where he met the love of his life Joan Schultes Botbyl. He lived to care for his beloved, Joan, and when she passed six months ago his heart was broken. All who knew Allan remember him for his many stories and he did have many. In lieu of flowers please send a donation to your favorite charity.

The family of Allan K. Botbyl created this Life Tributes page to make it easy to share your memories.