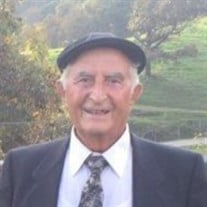 Agostino “Gus” Menna, 86, of Clearwater Florida passed away Wednesday February 17, 2021 at Morton Plant Hospital. He was born in Roccamorice, Italy on June 18, 1934 to his parents Antonio Menna and Anna D’Angelo . Agostino is survived by his wife Marian; son Marco Menna; 3 daughters Anita Simone, Elisa Castelli and Amy Menna; sons-in-law Paul Simone and David Castelli; Grandchildren, Carissa Simone, Nadine Menna, Audrey Menna, Eric Simone, Angelina Castelli, Domenic Castelli, Wesley Egerter, Laurel Egerter and Travis Egerter; Sisters-in-law Rosalia Menna and Elizabeth Cairo. In addition to his parents, Agostino is predeceased by 2 brothers Alberto DiPronio and Pantaleone “Leon”Menna; 4 sisters Maria DiGiovanni, Guiseppina Giansante, Maria Donata Menna and Iolanda DiPronio. Including his immediate family, Agostino was graced with many nieces and nephews he held close to his heart. He cherished an abundance of friends from the mountains in Italy, to his current home in Clearwater Florida. Agostino left Italy at age 19 to go work in the gold mines in South Africa for 7 years. He then moved to Amherstburg Ontario Canada to work with his brother Leon. He worked at Allied Chemical and built homes while living in Canada. Agostino and Marian Menna were married in Detroit Michigan November 19, 1966. Together they moved to Clearwater Florida in 1972 where they entered the hospitality industry. Agostino found great success as a hotelier throughout Pinellas County and the US 19 Corridor. Agostino was a family man whose never ending love will be truly missed. Live Streaming will be available for the funeral mass at Espiritu Santo Monday, February 22, 2021. https://vimeo.com/514417278. Donations can be made in memory of Agostino Menna to the Pulmonary Fibrosis Foundation. https://app.mobilecause.com/vf/PFFTribute/AgostinoMenna

The family of Agostino Menna created this Life Tributes page to make it easy to share your memories.

Send flowers to the Menna family.